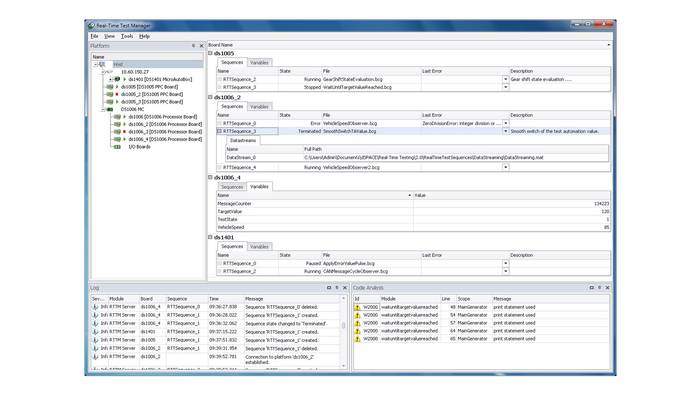 Automated testing is usually performed by executing tests on a standard PC connected to the hardware-in-the-loop (HIL) system. However, this method often cannot cope where greater timing precision is required – for example, if ECU interaction has to be captured and responded to in a range of milliseconds. Real-Time Testing with its Python scripts for real-time testing is the answer.

The scripts run on the processor board of the HIL system in real time, i.e., synchronously with the model, so all test actions are performed on a real-time basis – 100% reproducibly. This opens up expanded test options with dSPACE Simulator. Reactive tests which respond to changes in model variables within the same simulation step can be implemented. Time measurements in tests are also far more precise, as there are no latencies in communication. Simulation step size is now the only limit to the maximum time resolution of measurements. Real-time test scripts do not only run on HIL systems but also on VEOS, dSPACE's platform for PC-based offline simulation. Therefore, you can reuse the test scripts seamlessly throughout the entire development process – from virtual validation to HIL simulation.